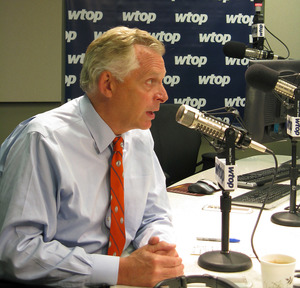 Gov. McAuliffe answers a question during "Ask the Governor" Aug. 26, 2015. (WTOP/Amanda Iacone)
WASHINGTON — Gov. Terry McAuliffe said that Wednesday's triple shooting in Franklin County demonstrates why tougher gun restrictions are needed in Virginia and the country.
"There's too much gun violence in this nation. We wake up every single day, in some part of this great nation, someone has been innocently gunned down," McAuliffe said following WTOP's "Ask the Governor" program that aired after a gunman shot and killed a TV reporter and cameraman and injured the woman they had been interviewing.
He called the shooting unimaginable.
"A young woman 24, a young man of 27, in the prime of their lives. Their lives are over today. Somebody needs to be held accountable for that. We need to stop it," he said.
Virginia is no stranger to headline-grabbing gun violence. In 2007, 32 people were killed at Virginia Tech by a single gunman.
During the program, McAuliffe said he's twice asked the General Assembly to rein in guns in the state and twice lawmakers' rebuffed his efforts.
"It never sees the light of day," he said of his legislation, reforms that he campaigned on as a candidate for governor.
During the legislative session last winter, McAuliffe wanted to reinstate a limit on how many handguns an individual can buy a month to just one. He also wanted to prevent convicted domestic abusers and those subject to a protective order from carrying a handgun. And he wanted to ensure that individuals undergo a background check when they make purchases at guns shows.
McAuliffe says when he's bought his hunting rifles he had to go through a background check, a process that took just a few minutes. He says everyone should have to go through a similar process.
"There are certain people who should not be entitled to own a firearm," he said. He pledged to continue pushing for gun legislation despite the lack of interest from lawmakers who instead have passed bills that allowed Virginians to carry loaded shotguns in their vehicles and on public roads and dealing with the acquisition of machine guns — bills that he vetoed.
"It's just tragic that this kind of legislation cannot be passed and signed into law," he said.
McAuliffe said that the General Assembly's stance on gun laws is a result of elections. "People need to vote," he said.
Redistricting and a judicial nominee
McAuliffe also wants more competitive races and he believes redrawing the state's 11 congressional districts will accomplish that.
He plans to submit a letter to the court around Sept. 1 asking the courts to draw the new lines after the legislature failed to do so during a special session Aug. 17.
"They decided to do nothing. It was almost embarrassing to watch, it was like children at play," McAuliffe said of the legislature.
The state was ordered to redraw those district lines by Sept. 1 after a federal court found they were unconstitutional for packing too many black voters into Rep. Bobby Scott's third district, which zigzags from Hampton Roads to Richmond, and diluted the voting strength of black constituents in neighboring districts.
But Republicans, who control both chambers of the legislature, didn't want to return to Richmond to draw new a new map and tried to force McAuliffe to call off the special section by rejecting his nominee for the state Supreme Court, he said.
Without a special session, McAuliffe's pick Jane Roush could have continued to serve into January, when the legislature would convene again and reconsider the appointment. But McAuliffe refused to back down and pushed forward with the special session, he said.
"That's not how I operate. I called their bluff," he said.
Republican lawmakers have said that McAuliffe didn't consult them on his pick. But McAuliffe said that Senate Majority Leader Tommy Norment didn't take his and Roush's phone calls and that House Speaker Bill Howell spoke with Roush about her appointment.
"This petty who called who, we do not have time for this," he said.
He called Roush "tough as nails" and said she was the most qualified candidate. He he plans to reappoint the former Fairfax County Circuit Court judge on Sept. 16.
3rd & 7 37yd
3rd & 7 37yd
B
S
O
close
close