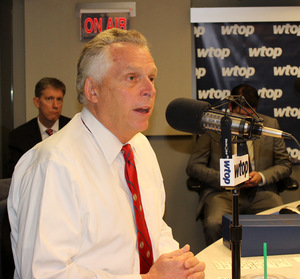 Virginia Gov. Terry McAuliffe talks about the state budget shortfall during "Ask the Governor" on Wednesday, Aug. 31, 2016. (WTOP/Amanda Iacone)
— A budget crunch in Virginia will not lead to new or higher taxes and won't halt improvements along the Interstate 95 and 66 corridors, Gov. Terry McAuliffe said Wednesday.
The state faces a budget shortfall of up to $1.5 billion because of lower than expected income tax and sales tax revenue. McAuliffe has proposed halting scheduled pay raises for teachers and state employees and tapping the state's Rainy Day Fund to close the funding gap. State legislators won't decide until this winter how to address the gap.
But McAuliffe said the option of a tax increase or even new a new tax was off the table.
McAuliffe said the underlying economy is strong and the state continues to add jobs and to attract employers that are hiring. However as older workers retire from higher paying jobs, they are replaced with younger, less experienced workers who earn less money and pay less taxes.
"All states are having to deal with this issue," he said.
Education changes will be the key to a secure economic future for the state. But students must graduate with the skills needed by technology companies — businesses that have thousands of openings in Virginia today, he said.
Last year lawmakers agreed to increase public education funding by $1 billion and to redesign public high schools to allow students to train earlier for modern technology-focused jobs. And that new money won't be touched, the governor said.
"It is my top priority to preserve our education funding," he said.
McAuliffe also said that recently announced road projects in Northern Virginia will not be affected by any belt-tightening. Bids should be awarded later this year to add tolled express lanes along Interstate 66 west of the Capital Beltway. An extension of similar express lanes on Interstate 95 in Stafford County is already under construction.
Teachers and state employees could still receive a pay raise if the state's tax revenues stabilize, McAuliffe said.
He said Congress should pass legislation that would allow states to collect taxes from goods sold on the internet, which could provide an extra $250 to $300 million in revenue a year to Virginia.
And he again suggested that the state should take advantage of federal funding to expand the state's Medicaid program to more Virginians. The money would trickle through the state's economy and support jobs at hospitals and other health care related employers.
But Republican leaders in the General Assembly have repeatedly rejected that idea, fearing that the state would eventually have to pick up the full cost of the expanded health care service.
Election security
McAuliffe said the state is working with cities and counties and local boards of elections to ensure that voter registration data and even vote reporting systems are secure from hackers ahead of the Nov. 8 election.
"We're on top of this," he said.
He said hackers are constantly trying to access data from the state and businesses located in Virginia and that the threat is real.
"You bet you should be concerned. Everybody should be concerned."
Earlier this week, the FBI urged states to increase security after hackers targeted election systems in two states.
A state pilot program will review localities' cyber protections. "It is my goal to have all of our cities and counties in Virginia to the level that we're having the ultimate protection," he said.
Related stories:
3rd & 7 37yd
3rd & 7 37yd
B
S
O
close
close