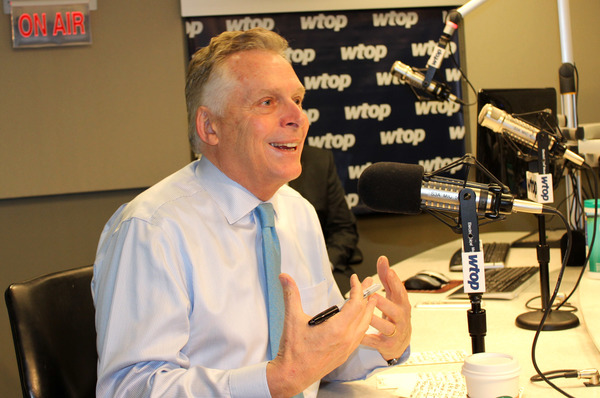 Virginia Gov. Terry McAuliffe discusses that presidential nomination contest during an appearance on "Ask The Governor" on Wednesday, Feb. 24, 2016. (WTOP/Amanda Iacone)
by Amanda Iacone, WTOP.com
WASHINGTON — Virginia Gov. Terry McAuliffe is looking forward to a Donald Trump-Hillary Clinton matchup this fall.
"Donald Trump is now steamrolling his way to the nomination," McAuliffe said during WTOP's "Ask the Governor" Wednesday. "If you and I sat here four or five months ago you'd have thought that virtually impossible."
McAuliffe also predicted that Clinton would win Virginia on Super Tuesday and that she would round up enough delegates to beat Bernie Sanders for the Democratic nomination on March 15.
McAuliffe chaired Clinton's 2008 presidential campaign and is long friend and supporter of the Clintons. He plans to campaign with President Bill Clinton in Richmond Wednesday night. Hillary Clinton is expected to campaign in the state later this month.
He criticized Sanders' campaign pledges as unrealistic but he isn't surprise that promises of free education and health care resonate with voters.
"As governor of Virginia, I'd love to promise everybody free college education. There is zero chance that could happen," he said.
He also said the candidate who can appeal to Hispanic voters, motivate black voters to go to the polls and who can do well in key states like Ohio and Michigan will win the presidency.

"There's been a lot of rhetoric on the other side through these presidential primaries that people have been offended by and has turned people off," he said. "We can rally all the different constituencies as we move toward the general election."

The gun deal
McAuliffe said he would likely sign legislation that cements the gun deal he forged with Republican lawmakers later this week. And he responded to the pushback he's heard from gun safety advocates who don't like the agreement.
The governor, who campaigned on expanding background checks in Virginia, called it a practical compromise and one that will make Virginians safer.
"There are absolutists who believe we should not do anything until we get mandatory background checks. But let me be very clear. Hell will freeze over before I will get mandatory background checks to pass the General Assembly. ... I don't have a majority in either chamber," he said.
Republicans control both the House and the Senate. But gun laws and gun rights issues don't cut strictly along party lines as many Democrats from more rural parts of the state don't support laws that limit access to guns or gun ownership. And bills McAuliffe has introduced in past years that address gun access have gained little traction.
"This was a huge step in the right direction," he said.
The deal would require gun owners to forfeit those weapons if they would be placed under certain protective orders or face a felony charge. The bill is intended to protect victims of domestic violence and McAuliffe said it would be one of the toughest protective order laws in the nation and could encourage more women to request the court orders.
The deal would also expand the availability of background checks to private sellers at gun shows and require state police to work those shows in order to conduct the checks. In exchange, Virginia will continue to recognize handgun carry permits from other states.
McAuliffe said in 2014, that guns were used in 66 out of 112 domestic violence homicides but there is little evidence that anyone with an out of state carry permit has done anyone harm in Virginia.
"I feel very comfortable with what we did because I believe that we made Virginians safer," he said. "Are we stopped? No."
Expanding the availability of background checks at gun shows will also begin to stem the flow of guns purchased in Virginia that end up in other states, where they are often used in crimes, he said.
"We've got to stop people without background checks from purchasing guns at our gun shows. It's been a huge loophole," he said.
Assuaging Arlington
McAuliffe also shed light on how officials were able to arrive at a deal to both widen and add tolls on Interstate 66 without angering Arlington County officials.
"Multimodal is important to them," he said. "The reason we did this was to add multimodal — we cannot keep adding cars."
Tolls that single drivers will pay beginning in 2017 will help cover the cost of adding transit, van pool or bus service along the interstate, services that will ultimately help reduce the number of cars using the road, he said.
Arlington had wanted to wait several years to see what impact the single driver tolls had on congestion before the road would be widened. The county notoriously went to court to halt the 95 Express Lanes project — the toll lanes currently end at the county line but are now slated to be extended to the D.C. line.
3rd & 7 37yd
3rd & 7 37yd
B
S
O
close
close