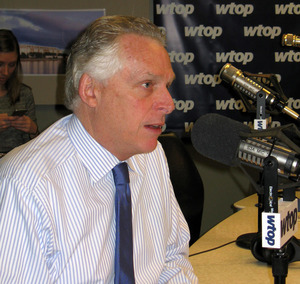 Virginia Gov. Terry McAuliffe talks about jobs and the economy on "Ask the Governor" on Wednesday, Jan. 25, 2017(WTOP/Amanda Iacone)
McAuliffe calls federal hiring freeze 'knee-jerk' decision, offers advice to new president, talks ACA
by Amanda Iacone, WTOP.com
WASHINGTON — Gov. Terry McAuliffe warned Tuesday that Virginia could lose as much as $300 million in federal funding if the Affordable Care Act were repealed without a replacement law to address health care spending.
The state would lose almost $160 million in prescription rebates for Medicaid alone, he said during WTOP's "Ask the Governor" program on Wednesday. But proposals to turn to federal block grant funding as part of any replacement law also concerns McAuliffe because he fears Virginia could be locked in at what he called a "very low number."
McAuliffe spent two days on Capitol Hill this week talking to members of Congress, including Speaker Paul Ryan, about the health care law, trade and sequestration. He said the idea behind the grants is that they would give states more leeway and the money could be spent more efficiently if handled by the states instead of the federal government.
McAuliffe fears such a plan would lock in states at their current funding levels, including states that expanded their Medicaid programs and are receiving more funding as a result. Virginia receives $4.6 billion in federal funding annually that helps the state pay for its Medicaid program, which provides for long-term nursing home care for the elderly plus medical services for children. The program also benefits those who are disabled, he said.
Virginia's receives a smaller federal match than other large states due to a combination of the state's relative wealth, the services provided in Virginia and because the state did not expand its Medicaid program under the Affordable Care Act.
Sequestration
Among McAuliffe's stops on Capitol Hill was to see Speaker Paul Ryan. He and Nevada Gov. Brian Sandoval, who chair and co-chair the National Governors Association, spoke with Ryan on Wednesday.
"What (Ryan) said to me was encouraging," McAuliffe said.
Caps on military spending are expected to remain in place. But Ryan was confident that other federal spending cuts associated with sequestration would come off the table, McAuliffe said.
Hiring freeze and a wall
McAuliffe called President Donald Trump's decision to freeze hiring among most federal agencies a "knee-jerk" campaign promise, not a plan to cut spending out of the federal budget. He encouraged Trump to take time to review spending before making such changes.
"Let’s find places where we can bring efficiencies to the government," McAuliffe said. "Your human capital is the most important capital that you have."
He said Trump's hiring freeze also fails to account for the aging federal workforce and will hinder agencies ability to attract and retain young workers, who'll look elsewhere for jobs.
"This is not a message to build that federal workforce of the future," McAuliffe said.
McAuliffe, who supported Trump's opponent Hillary Clinton in last year's presidential race, similarly chastised the president's plan to build a wall along the U.S. border with Mexcio, calling it a "stunt."
"Do we want to spend $20 billion on a wall? Is that our immigration policy?" McAuliffe said.
Advice for the new president
McAuliffe encouraged Trump to focus on the job of governing.
"Forget about how many votes you got, forget about how many people attended your inaugural. It really doesn’t matter to the people sitting in Danville, Virginia. It really doesn’t," the governor said.
Trump tweeted early Wednesday that he is ordering a “major investigation” into voter fraud from the November general election. He has said previously that he lost the popular vote because 3 million to 5 million people living in the U.S. illegally cast ballots. The claims of voter fraud are unsubstantiated.
"No evidence. No facts. We had no voter fraud here in Virginia," McAuliffe said.
"He’s got to quit being so thin skinned. You are the president. You walk into the Oval Office every day. Who cares about your crowds? At the end of the day, Hillary Clinton got more of the popular vote. I’m sorry. Learn to live with it, and move on. The election is over."
Legislative update
McAuliffe left open the possibility that he might sign an updated bill allowing home-schooled student to participate in high athletics, commonly known as the Tebow bill, saying he would review the measure when it reached his desk. He vetoed similar legislation last year. The updated version includes a testing component for home-schooled children.
He also said he'd consider revisions to a bill that would allow guns on school campuses. He vetoed a similar bill last year because it didn't address training of school staff.
3rd & 7 37yd
3rd & 7 37yd
B
S
O
close
close