by Amanda Iacone, WTOP.com
WASHINGTON — Virginia Gov. Terry McAuliffe has vetoed legislation that would have prevented state agencies or local governments from penalizing religious leaders and religious organizations that refuse to marry gay couples saying that the bill wasn't necessary and that it would have discriminated against Virginia's gay residents. 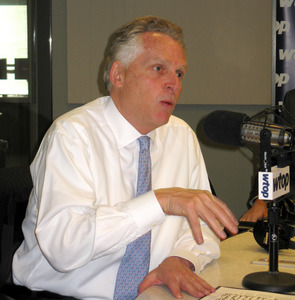 Virginia Gov. Terry McAuliffe answers a question on "Ask the Governor" on Wednesday, March 30, 2016. (WTOP)
"We already have enough religious freedom protections. It's discriminatory. It brings fear and persecution," he said of the bill during a visit to WTOP Wednesday. "I want Virginia to be open and welcoming to everyone. We don't need these pieces of legislation, which put an unwelcome sign up around Virginia."
McAuliffe, a Democrat, signed the official veto live on air.
Lawmakers around the country have tried to pass such bills, known as religious freedom legislation, to protect the rights of those who believe that marriage should be between a man and a woman despite last year's landmark Supreme Court ruling that granted same-sex couples the right to marry nationwide.
Unlike Georgia's Republican governor's announcement that he would veto similar legislation in his state, McAuliffe's decision comes as no surprise.
Early into the legislative session, McAuliffe vowed to veto such legislation if it ever made it to his desk. And when he took office in 2014, he signed an executive order protecting gay and transgender state workers from discrimination.
He said that the First Amendment, the Virginia Constitution and Virginia's Religious Freedom Restoration Act all grant protections for religious beliefs and practices without discriminating against other Virginians.
The bill would have protected clergy, religious agencies or organizations like schools and their employees from civil penalties for their religious beliefs concerning marriage.
Metro shutdown
McAuliffe also weighed in on the emergency Metro shutdown two weeks ago saying that General Manager Paul Wiedefeld made the right decision.
"Hats off to him," he said. "We fully support any measures he takes to make sure we have the safest system in the globe."
McAuliffe said that Wiedefeld demonstrated his commitment to riders' safety by making the drastic decision to shutdown the rail system on a weekday, leaving more than 700,000 riders with no way to get to work, school or medical appointments.
The shutdown could have crippled the region's overburdened roads but many commuters worked from home or took a vacation day alleviating the onslaught of extra cars.
McAuliffe said that leaders in Virginia, Maryland and D.C. all agree that a stand-alone agency with oversight of Metro safety is necessary. He predicted that a bill would be ready for lawmakers to consider when they return to Richmond next January. All three jurisdictions would have to pass the same legislation to stand up the oversight entity.
But he said Metro doesn't have to wait for the creation of such an agency to make changes.
"Let's make sure we're doing what we have to do every single day. Let's not wait for this commission to do what we need to do. Let's do it today," McAuliffe said.
In the meantime, federal transit officials have stepped in to serve as Metro's safety inspectors and have quickly turned up the pressure on Metro.
Presidential primary
McAuliffe brushed off a question about Bernie Sander's continued successes in the Democratic nomination fight saying that Hillary Clinton's team knew the campaign would have ups and downs. He said the competitive primary season "is good for the process," even if it lasts until June.
"This gets people fired up, they get involved in the political process," he said.
McAuliffe, who chaired Clinton's last presidential bid, said that the extended 2008 primary race between Clinton and Barack Obama didn't hurt the Democratic Party, which ultimately won the White House.
McAuliffe predicted that Sanders wouldn't be able to catch up to Clinton's sizable delegate lead and that she'll win the state she once represented in the Senate, New York — the next big contest for Democrats.
Gun restrictions
McAuliffe also defended his executive order banning guns from state office buildings, which gun rights supporters have derided as window dressing that does nothing to curb gun violence.
"I want safe environments," he said. "We don't need to have firearms in any of our state office buildings."
McAuliffe said he would continue to push for mandatory background checks, but that he doesn't expect the Republican-controlled legislature would pass such a bill.
Tuesday, former Arizona Congresswoman Gabby Giffords and her husband Mark Kelly announced they would begin advocating for such a change in Virginia. Giffords, a Democrat, was seriously injured in a 2011 shooting that killed six people.
McAuliffe said he entertained the couple for dinner in Richmond and that they spent hours discussing the issues around gun access.
"They are very appreciative of the work we've done."
McAuliffe angered many gun control advocates earlier this year when he struck a deal with Republican legislative leaders to expand access to background checks at gun shows and to require individuals with long-term protective orders to turn over their guns. But in exchange, Virginia would recognize the conceal carry permits from other states.
3rd & 7 37yd
3rd & 7 37yd
B
S
O
close
close