Ask the Governor: Terry McAuliffe May 27

Virginia Gov. Terry McAuliffe was in the Glass Enclosed Nerve center Wednesday, May 27 for "Ask the Governor."

WASHINGTON — Virginia Gov. Terry McAuliffe says he'll decide by the end of the summer how to pay for widening and adding tolled express lanes to Interstate 66 outside the Capitol Beltway. 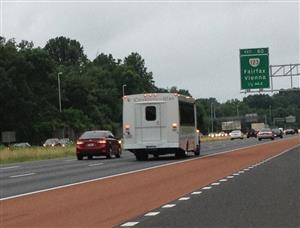 (WTOP/Rich Hunter)
But during an appearance on WTOP's "Ask the Governor" Wednesday, McAuliffe laid out the case for the state to borrow the money needed to pay for the estimated $2.1 billion project instead of partnering with a private company, like the 495 Express Lanes operator Transurban, to finance, build and then run the proposed the new lanes.

And the cost difference between traditional government financing through bonds and the newer more capitalistic approach, public private partnerships, could save taxpayers big bucks, the governor says.

"We have the option of doing this ourselves as a commonwealth. And by doing it under the analysis that I've been presented, I can save the commonwealth up to $1.1 billion,” he says.

The savings would come from cheaper construction costs and by recouping toll revenues that could eventually be reinvested into transportation.

Current plans would widen I-66 from the Capitol Beltway to Haymarket. Existing HOV lanes would become high occupancy tolled lanes with an additional high occupancy lane in each direction. The project has generated controversy because of the possibility that some homes in the Dunn Loring neighborhood would be demolished and because of the threat of more toll lanes coming to Northern Virginia commuter routes.

In the past, the state has contracted with private companies to build other major road projects. For example, the private consortium Transurban agreed to foot most of the bill to pay for the 495 and 95 express lanes in exchange for collecting the toll revenue for decades.

Public reaction to the express lanes has been mixed. Some drivers have enjoyed the option to pay a toll for a faster trip, while others don't think the lanes have eased congestion or don't want to have to pay tolls.

"We're in a different position. We had no options years ago because there was no money. Now we have money. For me, what's the return on investment, how to protect the taxpayer dollars. (Public private partnerships) make sense in certain circumstances," McAuliffe says.

Transportation funding reforms adopted two years ago, which tweaked the gas tax and increased the state sales tax, have provided the state the flexibility to consider the option, he says.

By eliminating a third party operator, the state also has more flexibility to plan for mass transit options along I-66, a major commuter corridor, in the future.

He envisions extending Metro, adding another 4,000 Park and Ride spaces and running rapid bus transit to help further reduce congestion along the interstate.

"Ease congestion, economic development and quality of life. Right now we fail on those three because it is just literally a parking lot,” he says.

Any initial, upfront costs would be covered by existing transportation funds. The state would borrow the money for construction and engineering and would repay its debt with the toll revenue, says governor’s spokesman Brian Coy.

By borrowing directly instead of borrowing from another company, the state could save on interest. Plus the state would be able to reinvest future toll revenue into transportation projects, as much as $500 million over 40 years, Coy says.

Constructions costs could also be cheaper to the tune of $500 million. Few companies have experience operating toll roads. But many more companies are qualified to engineer and build roads and the expectation is that competitive bids would bring down the price tag, Coy says.

Coy also says the number of homes that could be demolished to make room for the wider highway continues to drop — the number stands at 10, down from an original 30. And state officials hope to reduce the number to zero.

License plate readers
McAuliffe also defended his decision to veto a bill that would have restricted how long law enforcement can hang on to data collected by license plate readers.
The governor wanted to amend the bill to allow police to keep the data for 60 days, instead of the week-long restriction lawmakers proposed to rein in police surveillance. But legislators rejected the governor's changes.
He considers the license plate readers an important tool for police and he felt the 60-day limit was a reasonable compromise that balanced public safety with privacy concerns. Some Virginia localities hold on to the information for as long as two years, McAuliffe says.
He called the bill poorly written and says it would have forced the state to turn off all traffic camera's run by the Virginia Department of Transportation. The license plate numbers would have been treated like social security numbers, he says.
Earlier this month, the American Civil Liberties Union sued Fairfax County for keeping the plate numbers and location where the plates were spotted for up to a year, calling it an invasion of privacy.
Related stories:
Metro rail cars
McAuliffe says that Metro should move ahead with ordering 220 new rail cars that would replace older models purchased more than a decade ago to address safety concerns of the older cars and to take advantage of a price guarantee that expires in July.
"This is in the best interest of the Metro," he says.
But the transit agency needs federal approval to mothball the 5000 series cars, which federal money helped for, he says.
The new 7000 series cars feature safety upgrades and other advancements. Two trains made up of the cars have begun serving riders. Another 500 cars have been ordered to replace the original Metro cars.
3rd & 7 37yd
3rd & 7 37yd
B
S
O
close
close