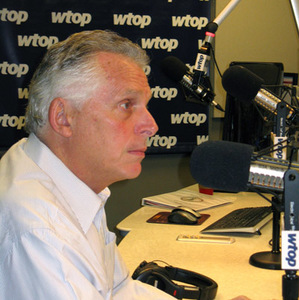 Gov. Terry McAuliffe listens to a question during "Ask the Governor" Tuesday, Nov. 24. (WTOP/Amanda Iacone)
by Amanda Iacone, WTOP.com
WASHINGTON — Virginia will extend express lanes along Interstates 95 and 395 to alleviate bottlenecks at both the northern and southern ends of the commuter lanes providing drivers a straight shot from Stafford County to the D.C. line, Gov. Terry McAuliffe announced Tuesday on WTOP.
McAuliffe said the state will extend the 95 Express Lanes 2 miles deeper into Stafford County in order to separate through travelers from drivers exiting onto Garrisonville Road.
The current configuration has created backups as all express lane traffic is forced to exit into the main lanes just north of the exit for Garrisonville Road.
Once completed, through drivers will have one lane to use before merging into the main lanes south of the interchange.
Northbound drivers will also benefit from the extension and will be able to access the 95 Express Lanes south of the interchange during morning rush hours.
Virginia House Speaker Bill Howell, R-Stafford, praised the improvements and had been lobbying for the changes.
"I am confident this project will substantially improve access for Stafford area residents," Howell said in a statement.
Construction is expected to begin sometime next year and will take two years to complete.
News of the extension comes on the heels of a similar announcement Friday that the state will also extend the express lanes 8 miles on Interstate 395 through Arlington County to the D.C. line.  And a third lane will be built - adding needed capacity along a congested stretch of interstate near the Pentagon that is considered one of the worst choke points in the nation.
"That's great news for commuters, all of you in Northern Virginia," McAuliffe said of two projects.
The project will allow both single drivers and high occupancy vehicles to remain in the lanes all the way to the Potomac River. Currently the lanes revert to HOV only from Edsall Road to D.C. during the rush hour.
McAuliffe said plans have been in the works for more than a year to extend the express lanes through Arlington County, which sued the state and halted the toll lane project at its border.
Arlington County has not yet formally weighed in on the project, said outgoing Board Chair Mary Hynes. But the proposal does appear to address some of the original concerns that sent the county to court like performing an environmental assessment and generating revenue to provide transit and multimodal options.
She hopes that the state will listen to concerns and feedback from the county and residents, like it has on the proposal to add tolls along Interstate 66.
Construction will begin in 2017 and take two years to complete. Transurban, which built and now operates the express lanes, is expected to complete the work under its existing contract with the state.
Security threats and refugee resettlement
McAuliffe said that he would veto a bill barring the resettlement of Syrian refugees in Virginia. He said such a bill would fly in the face of federal law, which gives the federal government sole authority over refugee placement.
In the wake of the Paris terror attacks, governors across the country including Maryland Gov. Larry Hogan have said they would not accept Syrian refugees into their states for resettlement out of concerns that militants could be among the new arrivals. But McAuliffe said they are merely posturing for political reasons.
McAuliffe has stayed largely quiet on the issue and previously released a statement through his spokesman that refugees undergo intense scrutiny and that precautions are taken to ensure the state's security.
"There is not a single thing that a governor can do," he said.
Last year the state accepted 25 Syrians — about 1 percent of all refugees — after they had gone through 18 to 24 months of security screenings. No Syrian refugees are currently in the pipeline to come to Virginia, McAuliffe said.
The state accepts about $11 million a year in federal funding to help resettle refugees. Some of those funds pay for a state employee to keep track of who they are and where they live, he said.
"I think taking that $11 million keeps us safer because we know which refugees are in our state. ... To forfeit that and lose control and knowledge, I don't think keeps us safer."
McAuliffe also said there are no specific threats to Virginia.
D.C. and other major cities are under heightened alert since police in Europe have uncovered plots for more attacks in Brussels and in Paris. And Monday the State Department issued a worldwide travel alert because of increased terror threats.
"I am very confident that we are very safe and secure in the Commonwealth of Virginia. I'm comfortable."
An education shake up
McAuliffe also gave an early look at the contents of his new two-year budget, which he'll present to lawmakers next month.
His top priority will be to modernize public education so that students are prepared for jobs of the 21st century.
"We really are going to shake up how you deliver education," he said.
He cited dropping numbers of teaching staff, higher enrollments, larger class sizes, rising numbers of students leaning English as a second language, and unwieldy state standardized tests as concerns he'd like to address.
"Our education system was built for the industrial revolution. We are no longer in the industrial revolution. Those jobs that we prepared our students for, what worked 10, 20, 30 years ago is not applicable today."
His budget will ensure continued funding economic development and would expand the state's Medicaid program — a policy change that lawmakers have previously rejected.
3rd & 7 37yd
3rd & 7 37yd
B
S
O
close
close