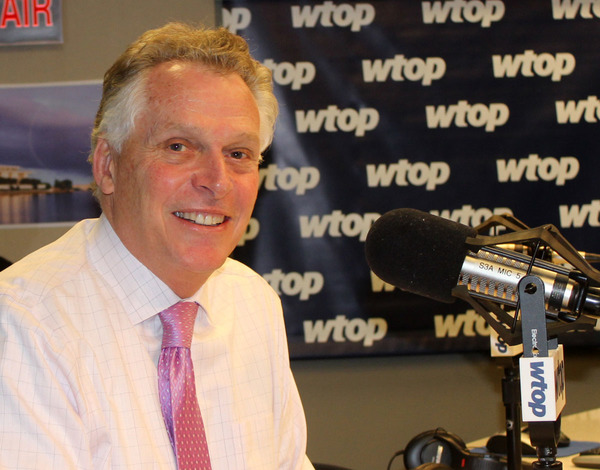 Virginia Gov. Terry McAuliffe joins WTOP for "Ask the Governor" on Feb. 22, 2017. (WTOP/Amanda Iacone)
WASHINGTON -- Virginia Gov. Terry McAuliffe plans to meet with the head of the Department of Homeland Security and U.S. immigration officials this weekend and said he will demand details about the Trump administration's plans to more aggressively enforce immigration laws.

"We all want to keep our communities safe. But there is a very fine line between keeping our communities safe and trampling on civil liberties," McAuliffe said Tuesday during WTOP's "Ask the Governor" program, citing a recent Immigration and Customs Enforcement raid in which Latino men were arrested outside an Alexandria church shelter.
McAuliffe said the incident raises concerns about a "chilling effect" on immigrant communities and that state officials need clarity on the new policies.
"If we as a nation have changed the standard that we are going to use, I want to know that," McAuliffe said. "Because I am very concerned what could happen is, we are going to drive people underground. People are not going to work with law enforcement. If they're a witness to a crime, they're not going to come forward and talk about that."
McAuliffe said the meeting with DHS Secretary John Kelly and ICE officials would happen Sunday. McAuliffe will also meet with President Donald Trump this weekend during a meeting of the National Governors Association, which McAuliffe heads.
McAuliffe's comments came a day after the Trump administration released sweeping new guidelines for immigration enforcement. All immigrants who are in the country illegally and convicted, charged or even suspected of a crime are now considered priorities for enforcement action, according to the new rules.
Obama administration guidance focused on immigrants convicted of serious crimes.
However, officials in some Virginia communities have complained the previous rules were too lax and that federal immigration officials were not doing enough to crack down on and deport illegal immigrants who commit crimes.
"We want to keep our communities safe; if someone's committed a crime, we want to go get them," McAuliffe said. "But we've done this for years; we have a procedure ... We need to focus on catching criminals and stopping crimes."
McAuliffe said he is concerned random stops will lead to a targeting of certain ethnicities.
The governor also said he would veto a bill, passed by the Republican-controlled Virginia legislature, that would require local law enforcement authorities to hold illegal immigrants until federal officials can take custody of them.
"Local law enforcement are busy doing their jobs to keep their communities safe. They are not federal ICE officials," McAuliffe said. "Nor are we going to turn our local sheriffs and other folks involved in law enforcement into ICE officials."
Black-tie dinner with Trump
McAuliffe, who chairs the National Governors Association, will meet with Trump for a black-tie dinner at the White House Sunday night along with 46 other governors in town for the annual meeting. Another meeting with Trump and cabinet officials will come next week.
"There are a lot of areas where we can work together, and that's the point I want to make to the president," McAuliffe said. He said there is consensus about retooling the automatic federal budget cuts, known as sequestration, and increased investment in infrastructure.
More vetoes
McAuliffe, who has had always had to contend with a GOP-led General Assembly, has vetoed upward of 70 bills during his tenure. That included four bills this week, such as a measure to allow Virginians to carry concealed switchblades and a bill to lower the age limit for carrying concealed weapons from 21 to 18 for active-duty military members and veterans.
"This legislature has passed the nuttiest pieces of legislation I have ever seen," McAuliffe said, referring to a bill to defund Planned Parenthood and what he characterized as anti-LGBT measures.
McAuliffe also nixed legislation, known as the "Tebow Bill," named for the former NFL star, that would have allowed home-schooled Virginia students to play on public school sports teams.
McAuliffe said parents choosing to home-school their children is fine. "But this is not a cafeteria. You don't get to choose," he said, referring to standardized testing and attendance requirements required of traditional public school students.
Governor 'very happy' with budget negotiations
The governor remains stuck in a dispute with GOP lawmakers over a $4.2 million effort to provide extra mental health resources in Virginia jails.
McAuliffe said the measure won't be a lost cause even if the legislature ultimately doesn't fund it, because current predictions indicate some left-over funding at the end of the fiscal year that he, as governor, has the authority to use.
"And my first priority in spending that money" is for mental health experts in jails, he said.
Overall, McAuliffe said he's "very happy" with the budget negotiations, which are entering their final stages. Lawmakers mostly kept funding levels for education and efforts to fight the opioid epidemic in Virginia.  "We're 95 percent there," McAuliffe said. "Of course in the end, we're going to have differences."
McAuliffe: Someone tried to hack me
The governor has made boosting the importance of cybersecurity a key priority as head of the governor's association and made several attempts to boost the state's own online security defenses.
A state audit, however, criticized this month the Virginia Department of Taxation and its partnership with tech company Northrop Grumman, saying its review turned up several important security patches that hadn't been implemented.
McAuliffe said overall the state suffered 86 million cyberattacks last year -- one every 4 seconds -- and that Virginia is in better shape than many other states.
"We're going to have incidents," he said. "We can have the best protocols. These people are -- they hacked our presidential election ... We are out there leading our country. But every day is a new day in cyber."
McAuliffe also revealed a foreign hacker recently tried to break into his personal state email account but was thwarted.
3rd & 7 37yd
3rd & 7 37yd
B
S
O
close
close