Ask the Mayor July 14
THANKSGIVING NEWS: Thanksgiving dinner for pets? | What to do with leftovers | 100 recipes | Grocery stores open on Thanksgiving | WTOP Weather

by Amanda Iacone, WTOP.com
WASHINGTON — D.C. Mayor Muriel Bowser says that crime will not be tolerated on what she called "America's" subway system and is looking into whether stiffer penalties should be imposed for crimes committed against Metro passengers. 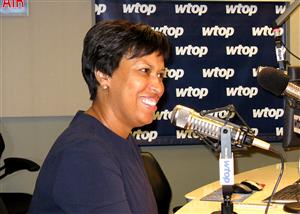 D.C. Mayor Muriel Bowser. (WTOP)
She called the deadly July 4 stabbing on a Metro train while other riders watched an "extraordinarily heinous" crime. But she said such violent acts are rare on Metro and she wants to keep it that way.
"We want to send the message loud and clear that any one intending to do harm to Metro staff, Metro passengers is going to be dealt with immediately and with a strong response," Bowser said during and appearance on WTOP's "Ask the Mayor" Tuesday.
While serving on the D.C. Council, Bowser pushed for a bill that would enhance the penalties for anyone convicted of committing a crime against Metro workers. And she's asked her staff to review whether tougher penalties should also be applied to any crime against passengers as well.
She called the Metro clean and safe unlike subway systems in other cities. "We won't tolerate that perception or that reality changing."
Bowser said she's reached out to prosecutors trying another case of a passenger who was assaulted on Metro several weeks ago urging them to take a tough stance. She is hoping for a similarly aggressive prosecution for Kevin Sutherland's killer.
In the meantime, Bowser said passengers should feel safe riding Metro. Cameras located at entrances and along platforms are effective deterrents and crime solvers.
"There is no safe place to commit a crime that will go undetected, unenforced or unprosecuted," she said.
She said it is not feasible to have an armed officer on each train.
Safety on Metro however extends to the functionality and maintenance of the train cars, track and electrical equipment. And Bowser is set to meet with U.S. Transportation Secretary Anthony Foxx, Virginia Gov. Terry McAuliffe and Maryland Lt. Gov. Boyd Rutherford to discuss the future of Metro.
Bowser said WMATA, the authority which runs Metro, needs to hire a new general manager with the leadership skills and vision to make urgent changes. Metro also needs to be accountable and get its payments on track with the federal government.
But Metro is also waiting on federal rules to be written related to safety oversight, something the mayor plans to discuss when she meets with Foxx, along with the need for additional federal funding.
"It's our transit system. But it's also America's subway system," Bowser said, noting Metro carries a heavy load of federal workers plus millions of tourists who come from around the world and all 50 states. "The federal government has a unique responsibility and interest in investing in our Metro system."
The Obama administration has included $150 million for Metro in its proposed budget and Bowser hopes the funding survives the scrutiny of Congress.
In comparison, Metro has a $3 billion budget funded by the localities and states served by its rail lines and buses.
Bowser said her administration's plans to improve the flow of vehicle traffic along the District's roads — like with designated bus lanes and synchronized signals — rely on Metro being a dependable partner.
Disappointed over Donald
Bowser also spoke out against comments presidential candidate Donald Trump has made about illegal immigrants. She called his statements "idiotic" and disappointing and said she hopes he recants them.
But she still supports the redevelopment of the Old Post Office into a Trump International Hotel.
"It is important that the hotel is successful. It's going to be a big part of the revitalization of that part of Pennsylvania Avenue," Bowser said.
Bowser said she's worked primarily with Ivanka Trump on the hotel and the mayor hopes Trump's daughter continues to be the face of the project.
Protesters have called on the federal government, which owns the building, to halt the project.

The D.C. Fire and EMS Department has been plagued by equipment and staffing shortages in recent years, which has led to several high profile deaths after ambulances were delayed and couldn't get to patients in time.

Bowser said she now gets a daily update on the number of ambulances deployed and that the number grew by 10 since she's taken office. But she says adding ambulances won't be enough to keep pace with the demand as medical emergency calls have ballooned since January.

Bowser said she's committed to making sure the department has enough qualified staff to replace retiring firefighters and paramedics, and that equipment is in good working order. But one of the biggest challenges facing the department is how to keep pace with the District's population growth.

People and businesses continue to move into D.C. and are occupying sites where "people haven't lived in decades." The department has to rethink how it will deploy ambulances and staff to cover those areas, she said.