Voters throughout Virginia and in some Maryland cities headed to the polls Nov. 3. Here is a recap of voters' choices for county or city officials along with Virginia senators and delegates.

WASHINGTON — Election night in Virginia brought no major surprises and kept the state Senate and House of Delegates in the hands of Republican lawmakers. But several minority candidates made history in local races.

Two of the most-watched General Assembly races in the region were won by Democratic candidates but the wins did nothing to give Gov. Terry McAuliffe the extra seats he was hoping for in the Virginia Senate.

The result means that McAuliffe will have little chance of expanding Medicaid to cover more of Virginia's poor or enacting tougher gun laws during his final two years in office.

Democrat Jeremy McPike won 54 percent of the vote to beat Manassas Mayor Hal Parrish in the 29th Senate District race, according to unofficial election results. The district covers portions of Prince William County, Manassas and Manassas Park. McPike will replace Democrat Chuck Colgan, who is retiring after a long career in the Senate.

Gun legislation figured heavily in the race. Michael Bloomberg's gun control group spent an estimated $2.1 million trying to help Democrats in two key Senate race including McPike, based on an analysis by The Center for Public Integrity.

But a proposal to add tolls on Interstate 66 inside the Capital Beltway also became a major issue in the race and McAuliffe tried to drum up support for Democrat candidates in hopes of securing support for his administration's toll plan. Republicans have loudly criticized the scheme for failing to add capacity to a heavily traveled road that taxpayers have already paid for. And GOP leaders have vowed to ax the plan when the legislature convenes in January.

In a neighboring district, incumbent Sen. Jennifer Wexton, D-Leesburg, held off challenger Stephen Hollingshead, who campaigned against the toll plan. The 33rd Senate District stretches from Leesburg to Herndon.

The House of Delegates stayed firmly under the control of Republicans but Democrats managed to pick up one additional seat. There was no change in the number of Senate seats held by Democrats and Republicans. 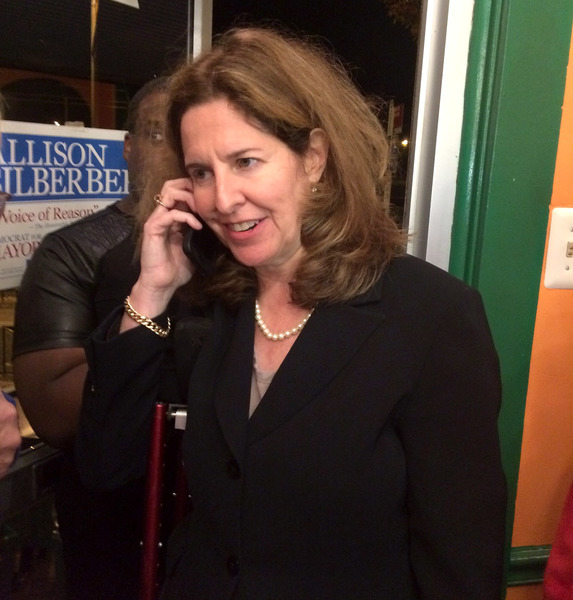 Alexandria Mayor-elect Allison Silberberg talks on the phone during her election night celebration in Del Ray on Tuesday, Nov. 3, 2015. (WTOP/Dick Uliano)
Loudoun County voters made historic changes to its Board of Supervisors, ousting its chair and adding black supervisors for the first time in the county's history.

Phyllis Randall will become the first black woman to hold the post of board chair. She beat incumbent Scott York and two other candidates to earn the county's top seat. She has not previously served on the board.

“Ethics and transparency, the importance of education ... full day kindergarten for our students, those types of issues resonated with the people of Loudoun," she said.

Voters also ousted long-serving and controversial Supervisor Eugene Delgaudio. Koran Saines will instead serve the Sterling District and he will join Randall as the first black supervisors ever to serve on the board.

In College Park, voters chose Patrick Wojahn to be the city's next mayor. Wojahn earned 1,236 votes and Denise Mitchell earned 846 votes, according to unofficial election results.

He'll be the first openly gay man to hold the job.

"I’m deeply honored that the citizens of Alexandria have spoken overwhelmingly," Silberberg said at an election night party at a Mexican-American restaurant in Del Ray.

“It will be a new day in Alexandria. This is a change election. The citizens of Alexandria have voted for me, they believe in, I think, historic preservation. It’s a core value of our city and it should be a core value in our leadership.”

The pace and type of development in the city was a major issue in the city's primary.

And on the Fairfax County School Board, two incumbents will not return after losing to challengers.

Incumbent Patricia Reed won 41.5 percent of the vote to challenger Dalia Palchik's 58 percent in the Providence District. And At-Large member Ted Velkoff came in fourth place out of a field of nine candidates, according to unofficial election results.

Correction: This story has been corrected to reflect that two incumbents, not three as previously reported, lost their re-election bids for Fairfax County School Board. Board member Jane Strauss won her re-election bid.

Powered by Platform for Live Reporting, Events, and Social Engagement
500
Log in to your WTOP account for notifications and alerts customized for you.